“Families have a unique role that should be recognized and valued” 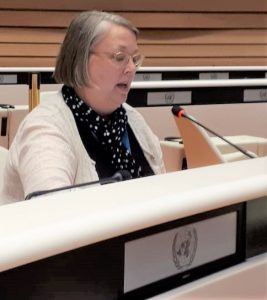 Sue Swenson speaking at the 20th session of the United Nations Committee on the Rights of Persons with Disabilities.

Inclusion International‘s president Sue Swenson has spoken today at the 20th session of the United Nations Committee on the Rights of Persons with Disabilities. She highlighted the role of families within the movement for the rights of people with intellectual disabilities. Sue Swenson also pointed out how the denial of legal capacity violates self-advocates’ right to assembly and to form organisations, and also addressed issues such as accessibility of participatory processes and institutions.

I would like to thank the CRPD Secretariat for giving me the opportunity to take the floor at the occasion of today’s opening. My name is Sue Swenson and I am the President of Inclusion International, a network representing and empowering people with intellectual disabilities and their families around the world. We have 200 members in 115 countries across 5 regions.

I would also like to thank the CRPD Committee members whose terms will end soon and thank you for your commitment to improve the lives of people with disabilities across the World and your openness in many of our exchanges and the attention you paid to Civil societies’ submissions in finalising General Comments.

The General Comments triggered very important discussions over the past year on key topics such as independent living, equality and non-discrimination and now participation.

As a movement championing the rights of all people with disabilities to be included and actively involved, we must be irreproachable in the way these crucial discussions are organised to make them accessible to everyone. The participatory processes should be easier to understand to enable the participation of everyone. It means for the CRPD Committee to have more plain language information and easy to understand materials along these processes. We appreciate all efforts of the Committee to improve access to proceedings by self-advocates and we look forward to future developments; Our movement should pave the way for a fully inclusive model of participation and show it to our communities where people with disabilities still face many barriers.

The most significant barrier that remains to prevent people from participating and having a voice is the denial of legal capacity and denial of the right to make own decisions. It prevents them from participating in public life (elections, citizenship, employment). It affects their ability to decide about their own personal matters too (marriage, ownership,). It also violates their collective right to assembly and to form organisations of self-advocates legally recognised on an equal basis with others.

Too many people in institutions have less or no opportunities to raise their voices and become visible on the public place. People living in rural areas also more likely to be excluded from participating in the society due to the increased lack of support.

Our movement should address these issues and ensure the participation of all. All also include families. Our movement must be expansive and inclusive of families and not replicate the exclusion they already face in the community. The disability community is strengthened by diverse representation.

Families are the main source of support for people with intellectual disabilities and a valued part of organisations of persons with intellectual disabilities and their families. Especially people with complex support needs and those who do not communicate in typical ways rely, almost exclusively, on their families to support them and articulate their support needs. Without them, they are invisible and powerless.
We hear the arguments against families, based mostly around the experience of some of the persons with disabilities who have been treated badly by family members, or who have not been supported to gain independence. We support all efforts to ensure that people with intellectual or other disabilities are not out-maneuvered in policy negotiations, and also that families are not out-maneuvered by governments who may depend on families to achieve national goals without affording them any support to do so.

We are not denying those. We strongly believe that the way to overcome this is not by excluding families, but by the opposite – giving voice to those who support independent live and human rights, by encouraging inclusive cooperation’s

The voice of a family member does not substitute the voice of person with intellectual or cognitive disabilities. For most of them though, it is a mediating force between the person and an unhelpful or dismissive environment.

While families cannot be considered as persons with disabilities, they are not a third party either as the UNCRPD Committee clearly recognized (GC 5 on article 19)
Families have a unique role that should be recognized and valued. Their crucial role has been underlined by the Committee itself during the key transitional periods for persons with intellectual disabilities’ lives: from childhood to adulthood, parenthood… (GC 5). Because of barriers in community and a lack of supports and services to individuals and their families, families experience discrimination and increased economic and social stress.

Our goals must include ensuring that families are up to the task of providing sustaining and empowering family environments for their members who experience intellectual disability. Frequently, families (inclusive of the disabled family member) are the advocates who demand recognition of rights and dignity from the larger environment.

Organisations of persons with intellectual disabilities and their families are often the only groups that reflect on the needs of families and advocate for families to have access to supports and services they need. They also provide valuable support to families to help them understand human rights, how to build self-advocacy and progressive ways of supporting their sons and daughters across the lifespan. Inclusion International is a united network of self-advocates and families working together for inclusion. A strong self-advocacy voice and family voice complement and reinforce each other.”

Read Inclusion Europe’s submission on Article 4.3 and 33.3 of the UN Convention on the Rights of Persons with Disabilities – “Participation of persons with disabilities in the implementation and monitoring of the Convention”

Today, people from all over Europe met in Geneva.

Geneva is a city in Switzerland.

Sue Swenson spoke to the people
present at the UN CRPD Committee.

Sue Swenson is the president of Inclusion International.

Here you can read the most important things she said:

If you want to read an interview we did with Sue Swenson,
click here.

The interview is about the right to get an education.