“It is totally worth the trouble!”

Our Inclusion Hero in August is Maribel Cáceres from Spain. 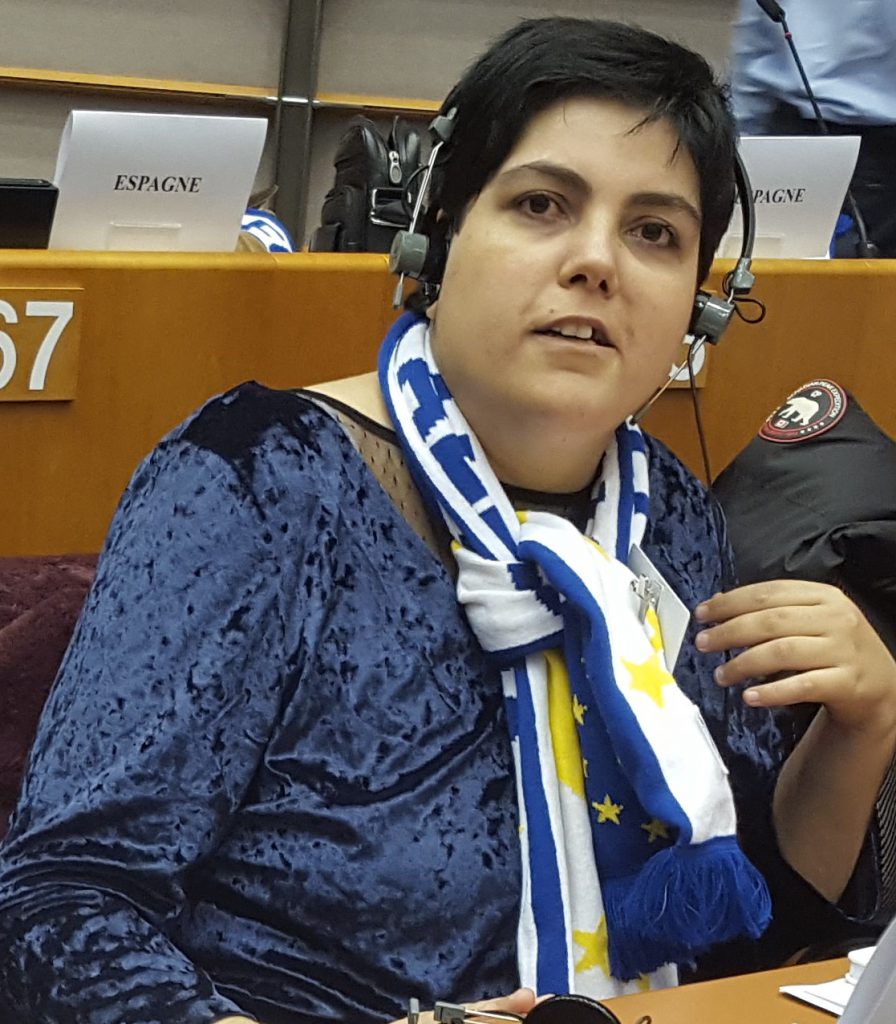 Maribel Cáceres at the Euroepan Parliament

Our August Inclusion heroine has learned how to stand up for herself: Maribel Cáceres was declared legally incapable when she was 18 years old, and she fought hard to regain the right to vote later. She will vote for the first time in her life in 2019! Maribel Cáceres is also a very active self-advocate, gives talks on many topics and has even traveled to Brussels last year to talk about intellectual disability. Read our interview:

A judge declared you legally incapable when you were 18 years old, so you were not allowed to vote. What did you do to regain the right to vote?

It was a very long process. The support of Plena Inclusión Extremadura was very important. They gave me advice and supported me along the way, so I could take the necessary steps one by one. A law suit was unavoidable, we needed to collect a lot of documents and information for the proceedings. After several months, I had a hearing. The judge decided that there were enough reasons to have my voting rights restored.

Which level of education do you have?

I completed the 2nd level of ESO, the Educación Secundaria Obligatoria (Compulsory Secondary Education). When I studied at school, I did not have enough support to be able to go further. I stopped going to class when I was 17 years old.

Later, you started taking classes at Plena Inclusión. Which subjects did you study? What kind of support did you receive at the time?

My life changed completely when I got in touch with Plena Inclusión. I started participating in some training courses, and the most important one for me was a “Train the trainer” course in basic rights. This course opened my eyes because it made me realize that I wanted to change my legal capacity status, to regain the right to vote. I also learned that people with disabilities suffer discrimination. And I thought that I could help other people in my situation so that they would not be discriminated against.

The course was held in the classrooms of the University of Extremadura. Being there was very important for me, it gave me a different perspective. Very few people with intellectual disabilities go to a university to study. I liked that experience so much that since then I have not stopped continuing my education.

You now work as a trainer and give talks on many topics. Which are these topics?

In 2015 I started working giving talks for an awareness campaign. The campaign is called “The Value of Difference” and is running in schools and institutes. In the framework of this campaign we have also visited universities and professional associations. In addition, I give lectures on cognitive accessibility and easy-to-read. During the last months I have also attended trainings on other things. And I take part in trainings on topics such as employment, prevention of occupational risks and aging.

The Spanish delegation in the European Parliament. Maribel Cáceres is in the 2nd row, in the middle.

You are also part of the Board of Directors of Plena Inclusión and its management support group. What are you doing in these functions?

Being part of the GADIR group gave me the opportunity to also become a member of Plena Inclusión’s Board of Directors, as an assessor. This September I will attend the meetings of the Board of Directors for the first time. I am very excited!

Last year you participated in the 4th European Parliament of Persons with disabilities. Can you tell us about your experiences?

It was a great experience! Five people with intellectual disabilities from Spain travelled to Brussels to participate in the event and to advocate for the right to vote of people with disabilities. We had the opportunity to attend a plenary session of the European Parliament and there we spoke up for our right to vote.

These were two very intense days, and very important for us. Never before a person with intellectual disability from my region, Extremadura, had been to Brussels to demand that our rights be respected.

Finally, you will vote for the first time next year. How are you going to prepare?

I have been unable to vote for so many years that doing so now will be a challenge.
A few weeks before the elections, I will inform myself about the election promises of each party. Then I’ll think it over and decide who to vote for.

What do you recommend to people who have lost the right to vote, as you did?

I think they should try to regain it! I would advise them to seek help from an association that can advise them on the necessary steps. They should not despair even if it can be a long process. They should fight to get their right to vote back. It is totally worth the trouble!

Our Inclusion Hero of July was Charles, a young man from France:
“Charles – a young man challenging preconceptions”

Our Inclusion Hero of June was Hendrik Jan Menninga, a “UN ambassador”:
“We make sure that the UN CRPD is not just a piece of paper”

Our Inclusion Hero of May was Sami Helle, a musician, self-advocate and politician:
“I chose what felt good. You see: I love music!”

Our Inclusion Heroine of January was self-advocate Elisabeta Moldovan from Romania:
“I experienced a lot of abuse in institutions. I wanted to change this situation for others.”

“Fighting for your right to vote can be hard
but it’s worth it!”

Our Inclusion Heroine in August is Maribel Cáceres from Spain.

When Maribel was 18 years old 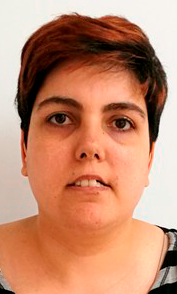 her legal capacity was taken away by a judge.
For this reason she was told
that she was not allowed to vote.

Then, she worked hard to get back her right to vote.

She reached her goal,
and so she will vote for the first time next year.

Maribel is also a self-advocate who does many things.

She came to Brussels
to talk about intellectual disability.

Here you can read our interview with Maribel:

A judge took your legal capacity away when you were 18 years old.
For this reason, you were told you cannot vote.

What did you do to get your right to vote back?

It took a lot of time.
I had a lot of support from Plena Inclusión.

Plena Inclusión is a Spanish organisation
that represents people with intellectual
or developmental disabilities.

I needed to convince a judge
to give me my right to vote back.

I needed to collect a lot
of documents for the meeting.

I had the meeting with the judge after some months.
He told me I was right
and I got my right to vote back.

At what age did you stop going to school?

I stopped going to school when I was 17.
I was not able to continue my studies
because I did not have enough support.

Then you started to go to classes at Plena Inclusión.

What did you study there and
what kind of support did you get?

My life has changed
when I started to go to classes at Plena Inclusión.

I took part in a class about basic rights.
Basic rights are rights that everybody should have.

I learned through this course
that I had the right to vote like everybody else.
Then I decided that I wanted my right back.

I also learned that people with disabilities
have to deal with discrimination.

I wanted to help people like me
fight against discrimination.

The classes happened at a university in Spain.
For me it was very important to be there
because not many people with intellectual disabilities
study at university.

Since I was at the university,
I have not stopped studying
because I like it very much!

Now you are a trainer.

A trainer is someone who teaches new skills to other people.

You give many talks about this.
What do you talk about?

In 2015, I gave my first talk in schools
for a campaign called “The value of difference”.
For this campaign I also went to talk
at universities.

And I gave talks to people
who work with people with disabilities.

I talked about easy-to-read and other ways
to make texts accessible.

In the last few months,
I have also learned about other things.
For example,

You are on the board of Plena Inclusión and
you are part of its support group. What do you do?

Since 2017 I am part of a group
of 7 people with intellectual disabilities.

We tell Plena Inclusión what is important for us
and for other people with intellectual disabilities.

I am on the board of Plena Inclusión and in September
I will take part in the board meeting for the first time.

I am excited about it!

Last year you took part
in the European Parliament of Persons with Disabilities.

What did you do there?

I was part of a group of 5 people with intellectual disabilities.

We came from Spain to Brussels to take part in the event.

We spoke up for the right to vote for people with intellectual disabilities.

These were two busy days.
It was very important for us.

I was the first person from the place I come from
to go to Brussels to fight for my rights.

You will vote for the first time the next year.

What will you do to get ready?

It will be a challenge
because I have never voted before.

I will look for information about each political party.

Then I will decide who to vote for.

There are still lot of people who have lost their right to vote.

What advice would you give them?

I think they should fight to have their right to vote back.

They can get help form organisations.

It may take a long time,
but they should never lose hope.

Even if it can be hard,
it’s worth to fight to get your right to vote back!

Our Inclusion Hero in May was Sami Helle. Read more.

Our Inclusion Hero in July was Charles from France. Read more.

Read our article on the European Disability Parliament.

Read our article on the right to vote in Spain.