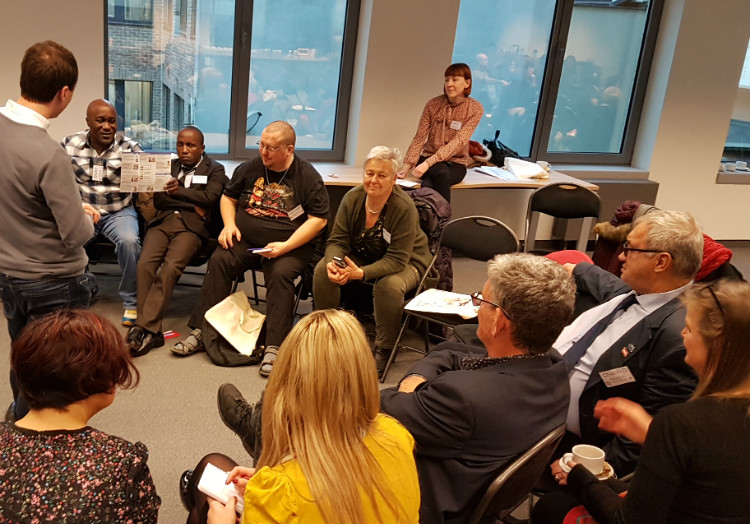 Harry Roche, self-advocate and Inclusion Europe board member, leads a workshop on voting for people with intellectual disabilities as part of
“Hear our voices”, Brussels, 2017.

“The right to vote must be enjoyed by everyone,” affirmed Věra Jourová, European Commissioner for Justice, Consumers and Gender Equality, during the debate. “This is inscribed in the European Disability Strategy.” Yet people with disabilities are still being denied the right to vote and stand in elections, she stated.

Furthermore, political participation is an essential part of the United Nations Convention on the Rights of Persons with Disabilities (UN CRPD), reminded Soledad Cabezón Ruiz, MEP (Group of the Progressive Alliance of Socialists and Democrats). While the EU is currently the only region in the world to have ratified the Convention, Ángela Vallina, MEP (Confederal Group of the European United Left – Nordic Green Left) noted that there are “shortcomings” in applying the UN CRPD on matters of political participation, especially when it comes to persons with intellectual disabilities. 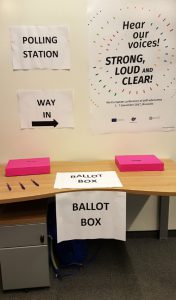 Part of the workshop on voting for people with intellectual disabilities, “Hear our voices”, Brussels, 2017.

Accessibility came up as a primary concern in ensuring the political participation of people with disabilities. Currently, people with disabilities encounter many kinds of obstacles to participating in politics. There are physical barriers, such as getting to and using polling booths. In addition to the requirement for practical support for people to get to the polls, there is potential for more people to get involved in elections using technology.

There are particular barriers to overcome for people with intellectual disabilities to participate in politics. For example, information how to sign up to the electoral register and how to vote is often difficult to understand.

There needs to be accessible information about elections. Easy-to-read information could be key to letting people know about political developments, so they can decide what they think and make their voices heard.

Denial of the right to vote

Furthermore, legal barriers mean that many people are not allowed to have a say in politics. “Being able to participate in politics is at the core of a democratic Europe, yet guardianships prevent people from doing so,” pointed out Tilly Metz, MEP (Group of the Greens/European Free Alliance). People with disabilities, including intellectual disabilities, should legally be allowed to vote.

Learn more about our recommendations for accommodating diversity in European elections here.

Watch the Plenary session on the political participation of persons with disabilities in the European elections here.

It is important that people with disabilities
have the chance to vote if they want to.

Cecilia Wikström is a member of the European Parliament.

Cecilia Wikström asked the European Commission
what it plans to do to make elections accessible for all.

There was an event at the European Parliament
to answer Cecilia Wikström’s question.

At the event, people who work
at the European Parliament and European Commission
talked about making next year’s elections accessible.

Věra Jourová is a European Commissioner.

She said that every person with a disability
must have the right to vote.
She pointed out that this is written
in the European Disability Strategy.

At the event, the speakers also talked about many other things.

Two speakers talked about the UN CRPD.
The UN CRPD says that it is very important
that people with disabilities take part in elections.

But in Europe there are still many problems
that stop everyone taking part in elections.

It can be hard for people with intellectual disabilities
to understand how to register for elections and how to vote.

Information about elections must be accessible.

There also needs to be be easy-to-read information about
what is happening in politics.

There is also another problem.
Many people still do not have the chance to have a say in politics,
because they are under guardianship.
This must change.

Everyone should be able to have a say in politics.

It is very important that people with intellectual disabilities
can vote if they want to.