Our Inclusion Hero in June is Hendrik Jan Menninga. 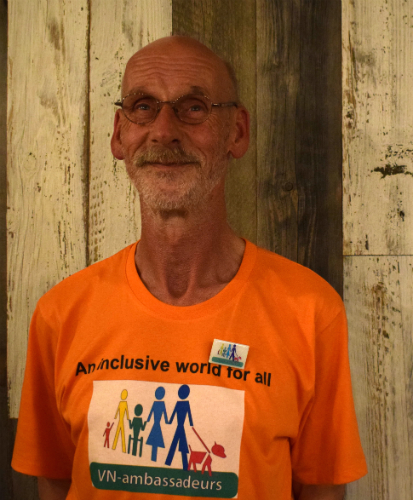 The “UN ambassadors” are a group of people who advocate for the implementation of the United Nations Convention on the Rights of Persons with Disabilities (UN CRPD) in the Netherlands. The initiative was launched by Jeroen Veltheer of the parents’ network “Coöperatieve vereniging Netwerk Ouderinitiatieven U.A.” and currently counts more than one hundred activists. These “ambassadors” approach local councils and work with them to make sure that municipalities respect the UN CRPD. Our Inclusion hero Hendrik Jan Menninga has been an activist for three years.

How did you become a UN CRPD ambassador?

I learned about the initiative during a meeting of a group of people with disabilities, which I am part of. I got introduced by Jeroen. That was in 2015 and now I am still a proud ambassador!

What does your work as a UN CRPD ambassador entail?

We raise awareness with local governments about the UN CRPD. We talk about one article of the convention at a time and thereby cover different issues. I started by informing local councillors about the things that are important to me, for example easy-to-read and making information better to understand. But we are also talking about physical access, for instance for people in wheelchairs.

We ask the municipalities for small steps to accommodate for people with disabilities. Two months after the first meeting, we take a look at how far they have come. Based upon this we suggest the next steps.

In this way, we make sure that the UN CRPD is not just a piece of paper, but gets practical meaning for people with disabilities.

What have you achieved so far?

For example, the village of Vries made its centre more accessible to people with disabilities. We had a say in the redevelopment of the centre and were giving them advice.

Another achievement was the development of our own programme on how to make sure that websites are accessible. We used this programme with a local government, and made an agreement with them to make it gradually more accessible. In the end it really was!

How easy is it for you to understand the UN CRPD? Do you use the easy-to-read version?

The original version is too technical for me. On the other hand, the easy-to-read version leaves some things out. It is a bit difficult for me to make the connection between the text and reality. What concrete situation might the text be linked to? But it also goes the other way: I sometimes have a feeling that something is not right or is missing, without being able to pinpoint which article of the convention this refers to.

What are your plans for the future?

We want to build an accessible gym for everyone in Zuidlaren, a village in the Netherlands. The village has plans for this and approached us to give them advice. The problem is that there are minimum requirements for buildings and we must put accessibility on top of that. Stricter rules should be made obligatory.

I also want to build a network of UN CRPD ambassadors in my province. At the moment, we are 33 people in this province alone! So now is the time to connect better to share information and help each other.

Our Inclusion Hero of May was Sami Helle, a musician, self-advocate and politician:
“I chose what felt good. You see: I love music!”

Our Inclusion Heroine of January was self-advocate Elisabeta Moldovan from Romania. Read more:
“I experienced a lot of abuse in institutions. I wanted to change this situation for others.”

Read more of our articles on the UN CRPD:

“We tell politicians
about the things that are important to us ”

We are celebrating this in a special way:
we are looking at what has been done in Europe
to make sure people are included.

Every month we will talk about one person
who has worked towards inclusion in Europe.

Our Inclusion Hero in June is Hendrik Jan Menninga.

The “UN ambassadors” work for the rights
of people with intellectual disabilities in the Netherlands.
An ambassador is a person
who speaks for an organisation.

The “UN ambassadors” talk about the UN CRPD
to mayors and other politicians.
They tell them how important the UN CRPD is.
They help them make sure that people with disabilities
get equal rights.

There are 100 people working at the “UN ambassadors”.
Hendrik Jan Menninga is part of the group.

How did you become a UN ambassador?

In 2015 I was part of a group of people with disabilities.
They told me about this project.
Then I decided to join.

What are you doing as a UN ambassador?

We tell the politicians in our towns and cities
about the things that are important to us.

For me, information in easy-to-read is important.
But we also talk about other things.
For example, easy access to buildings.

We give the politicians some time
to fix the problems that we have found.

Then, we check back to see if they have changed anything.

What have you done so far?

For example, the village of Vries
is now more accessible to people with disabilities.

We also created rules on how to make websites
more accessible.

We used these rules when we were working with
some politicians in one town.

Now the town’s website is much easier to use
for people with disabilities!

Do you use the easy-to-read version of the UN CRPD document?

The original text is too hard for me.
The easy-to-read text is good,
but it does not have everything in it.

What will you do in the future?

We will build an accessible gym in one village
in the Netherlands.

I will also bring together the people in my region
who work as UN ambassadors, so we can together.

Our Inclusion Hero in May was Sami Helle. Read more.

Read more of our articles on the UN CRPD:

Inclusion Europe asks for changes in the General Comment

Inclusion Europe gives some changes to make to the UN CRPD